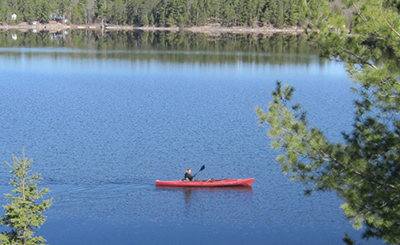 For paddlers looking to experience the French River by either canoe or kayak, the river offers an enticing, scenic, adventurous wilderness waterway system of channels and tributaries for all skill levels.

Novice canoeists can spend a leisurely day on its calmer, smoother and more sheltered stretches, navigating among grassy islands, bays while scanning the riverbanks for turtles, beavers, otters, waterfowl, bald eagles, black bears, while listening for the elk cows bugling, and even see the occasional deer or moose.

More experienced rafters and paddlers may want to check out the Flat Rapids, Dallas Rapids, Rainy Rapids and Pine Rapids as well as the rapids down the Old Voyageur channel to add challenge to their French River experience.

For those wanting the adventure of portaging to various levels of the French River or Georgian Bay there are areas of rapid white water that is full of speed and turbulence, especially in spring, when swirling, swelling currents grind river stones deep into the limestone riverbed below the falls such as Recollet Falls, Meshaw Falls, Sturgeon Chutes, Big Bear Chutes, Horseshoe Falls, Bass Lake, rapids such as the First Flat Rapids, Second Flat Rapids, Oullette Rapids, Five Finger Rapids consisting of Little Pine Rapids, Big Pine, Rainy, Double, Blue Chute, Little and Big Parisienne Rapids, and the Voyageur Channel all followed by an easy paddle to smoother, calmer areas on the French River or Georgian Bay.

Listed below are some sample routes that may be of interest to paddlers in the French River and Georgian Bay area:

A word of caution to boaters and canoeist is that one must be experienced, hire a guide, or know the rapids well before venturing through any of the swift water. There are times when water levels in these areas are not navigable by any experienced guide or person. Respect for the river and knowledge will provide wonderful experiences for all. 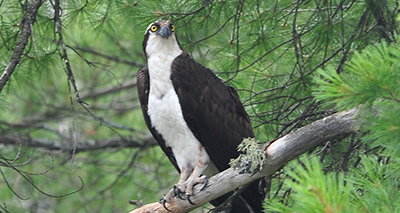 Pristine nature awaits you in the protected wilderness area of Northern Ontario out of doors. Canadian vacationers can view a red fox slithering along the shoreline, see beaver, hear the eastern timber wolf howling, watch with awe the soaring bald eagles, hear the cry of the loons with their wings flapping on take off, ducklings trailing their mother across the river while dunking for minnows flashing by, turtles sunning atop a dead head stuck in the river beds, geese honking during their migration, mushrooms bursting through granite rock and tree falls, gigantic  blueberries awaiting a child’s twinkling eyes with a big purple smile, black bear cubs swinging in the trees while their mother throws fish from the French River below. These are just a few memories and wildlife the guests of the French River Resorts Association have experienced while exploring, boating, hiking, fishing, or canoeing the famous Heritage French River Park.

Fall adds color to the palate of the serene scenery along with changes in the flora and fauna. Wildlife migrations occur, influx of birds and animals seeking food and refugee from the harsh winters ahead. The rise and fall of the water level from nature to the dams in the system expose the mysteries of years ago.

Visit the new French River Provincial Park Visitor Center to learn about the history of the French River and all that it has to offer. Exhibits such as the “Voices of the River” and educational events related to the cultural and natural resources of the river, including the Georgian Bay coast area are available to view and participate in throughout the warmer seasons. The centre is located near Highway 69 at the French River.

The French River Provincial Parks hosts numerous backcountry campsites available only by water (Permits required) starting at the bottom end of Lake Nipissing through the French River and out to the waters of Georgian Bay.

Winter snowmobile sport enthusiasts in Northern Ontario have an added advantage of two snowmobile bridges completing the connect of 150 miles of trails. One bridge crosses 14-mile Island and the French River at Highway 69.

Along with snowmobiling, other winter sports include: ice fishing, ice skating, and cross country skiing.