The French River plays host to outdoor enthusiast tourists looking for adventure, for relaxation or to just experience some of the best nature Northern Ontario has to offer in the form of activities such as fishing, paddling, backcountry camping and nature viewing.  What most travellers don’t realize is that the French River has served as host to many different types of industries and travellers for centuries and evidence of these times can still be found embedded in its shorelines, submerged beneath its waters and hidden along its portages today.

It is because of this legacy that the French River was named Canada’s first Heritage Waterway Park in 1986.  The French River Provincial Park flows for 110 km from Lake Nipissing to the Georgian Bay and consists of flat and moving water, many series of rapids and portages, and countless channels and tributaries to explore at your leisure.

Dating back to before French explorers, most notably Samuel de Champlain and Etienne Brule, were credited for exploring and mapping the French River in the early 1600s, the Aboriginal settlers were the first to live off the land, fish these waters, hunt in this forest and paddle its passages.  Proof of these tales can still be found in the forms of artifacts and relics, pictograms and pukaskwa pits.  The French explorers befriended and developed relationships with these settlers, discovering and establishing the routes that were used during the Fur Trade throughout the 18th and early 19th centuries.

In the late 1800’s to the early 1900’s, French River was host to the Logging industry. Villages were established in the French River and in the Georgian Bay.  Now known as one of Ontario’s Ghost Towns, the site of the village, Coponaning still holds evidence of times past as do the submerged Alligator’s near the Dalles Falls. 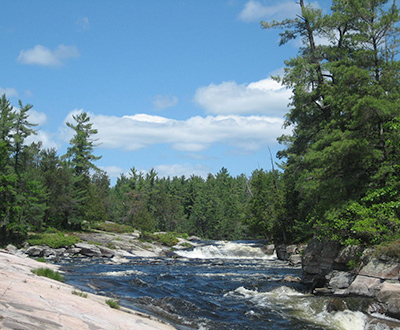 French River Provincial Park, Ontario, Canada  was designated a Heritage Park in 1985 in recognition of its “historic, natural, and recreational values”. The French River Heritage Park follows the waterway route of Aboriginal travel prior to European exploration in the early 1600’s, the Voyageurs, and fur traders that followed later.

This magnificent representation of Cambrian Shield is an excellent specimen of glaciated environment, which dates to 900 to 1600 million years ago – some of the oldest rock on Earth. Glacial erosion is noted in the mouth of the French River Delta, Georgian Bay region, leaving behind an extensive exposed bedrock, mostly granite rock.

French River, the waterway, was an important transportation system for Canada from 1615-1821. The Ojibwa named the “French River” because the river brought to their land French missionaries and explorers. Maps were produced for France by Etienne Brulé, in 1610 and Samuel de Champlain in 1615. The missionary Récollet and Jesuit Fathers came to live with the Huron Indians between 1629 and 1649, and then by the explorers Jean Nicollet, Pierre Radisson, des Groseillers and La Verendrye.

European traders transported furs from western and central Canada to the eastern trading centers and continued to develop the French River as a fur trade route throughout the 18th and early 19th centuries. Explorers Alexander Mackenzie, Simon Fraser and David Thompson used this important waterway route of the current Heritage French River Park too.

In 1870, pine logging developed over the next fifty years until the 1930’s from the demands of western America. Logging Villages grew up along the area including, the French River Village and the village of Coponaning, a thriving saw mill community near the river’s mouth on Georgian Bay. Logs were floated down river to the mills, but often were blown ashore in calmer areas of the waterway due to westerly winds which caused jams. This brought about the use of the Warping Tug known as the Alligator and some of their remains can be seen today at the Dallas Falls along the French River.

Today, this historical route to the west is known for providing an outstanding recreation area combining tourism, extensive natural resources in Ontario out of door areas, and leaves behind many archeological finds from Indian pictorials painted on the rocks to canoe and shipwreck salvage found in the rapids, bottoms of the numerous falls, and the Georgian Bay. Most importantly, is the amazing fishery this remote, wilderness area produces.

A Visitor’s Center for the French River Provincial Park opened near Highway 69 where it crosses the French River. The “Voices of the River” exhibit showcases educational events related to the cultural and natural resources of the river, including the Georgian Bay coast area are included in the Visitor center for visitors from around the world to view. Plan to visit this Interpretive Centre in your trip. 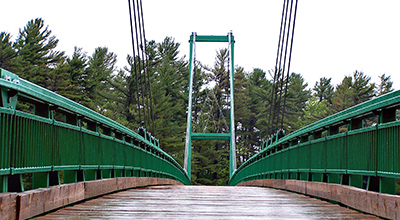 Winter sport enthusiasts in Northern Ontario have the added advantage of The French River Bridge, Canada’s largest cable supported snowmobile bridge. It has a span of over 300 feet and rises to 50 feet above the French River’s water level. It is constructed of steel coated with acrylic and the surface has a treated wood deck. Structurally, it has interior and exterior spans of cables with concrete pads at each end of the bridge poured on Crown land bedrock. The Pickerel River Snowmobile Bridge completed in 2003 crosses 14 Mile Island at Hwy 69, has a 400 feet span and is 30 feet off the waterway. These bridges link a continuous snowmobile trail of 150 miles in Ontario. Snowmobile travelers need to visit local tourism establishments in the French River Area for winter sports and events. Along with snowmobiling, other winter sports include: ice fishing, ice skating, and cross country skiing. Check the French River Resorts Association listing for French River resorts, lodges, hotels, motels, camps, cottages, and cabins open for winter outdoor tourist enthusiasts.